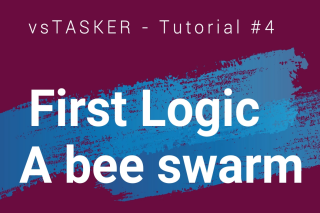 In this video, you will learn how to create simple Logic to conduct various behaviors.
To understand what is a Logic, the better is to refer to the documentation. But to summarize, a Logic is made of one or several logical objects organized into a functional graph with states and transitions.

The first Logic displays “Hello World” on the console screen. It contains only one object.
The second Logic is a little more elaborated but with only two task objects, simulates a swarm of bees.

Some code is provided below the video to help you build this demo in vsTASKER.
The database can also be downloaded.